Richard is an award-winning expert in communication and author of the new book ‘You Were Born To Speak’. Recently his team helped one client win over £1.2 billion in new business by improving the way they communicate, winning 100% of the work they bid for.

He has given specialist communication coaching to 50,000 people, across 45 countries, over the last 20 years. Richard’s clients include leaders across many industries, including companies such as Virgin, Expedia, EE, AXA, Capgemini and 3M. He is the proud father of two wonderful boys and enjoys spending time with family and friends when he isn’t travelling overseas.

Richard founded Body Talk Training in 2000 and began by working with a well-known Formula 1 Team for five years, hosting over 1000 presentations and VIP meetings for clients from around the world. He was also chosen by 20th Century Fox and Warner Brothers to promote two TV shows based on body language, in media interviews across the UK.

In 2014, Richard won the Cicero Grand Prize Award for Best International Speechwriter, beating professional speechwriters from around the world, chosen by an expert judging panel based in Washington DC. He is also the author of the book, ‘The It Factor’. He is also immensely proud of the team. He finds their passion, expertise and talent for coaching clients to achieve success incredibly inspiring.

Richard Newman is the author of You Were Born to Speak, a book about advanced communication skills for leaders in business. 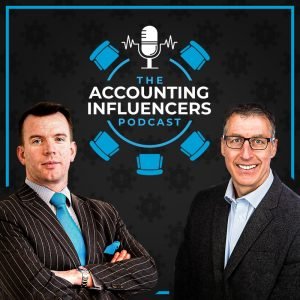 The Accounting Influencers Broadcast Network has a show coming out every weekday for busy accounting and fintech professionals.

The show is hosted by Rob Brown and Martin Bissett who are founders of the Accounting Influencers Roundtable (AIR) and have many years of experience serving the accountancy profession.

Check out all shows

A guide designed for accounting professionals in practice with 5 simple but effective things to do every day to create significant new career opportunities, greater influence, a better network and new business conversations.

Accounting Influencers is a commercially-focused, high-level international mastermind and door-opening club group for professionals selling to and through accounting professionals with Rob Brown and Martin Bissett.